Drug gang brings armed Loyalist into the New Lodge. Communities must now rally to take the power back. 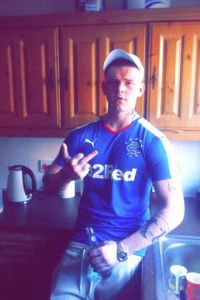 Drug gangs bring deranged armed Loyalist into the Nationalist north Belfast. Communities must now rally to take the power back.

In what is without doubt a worrying and sickening development, the IRSP in North Belfast can confirm that a drug peddling gang operating between Ardoyne and the New Lodge, recently invited a deranged armed Loyalist youth into its midst’s in order to target and intimidate both local citizens and potential opponents alike.

Early Saturday morning (15TH September) the violent offender who openly boasts of his very close connections within the UDA/UFF, entered the Grainne House tower block in the New Lodge area, he was armed and accompanied by two other members of the local drugs peddling operation.

Upon leaving, he was involved in an altercation with several young teenagers standing nearby. The IRSP has met and spoken with the youths concerned who have confirmed that during this altercation, the Loyalist produced a shot gun and attempted to fire upon the young nationalists, instead shooting himself in the process.

Unfortunately, the deranged Loyalist’s weapon was retrieved by the other members of his crime gang and is still circulating in the New Lodge.

Given the immense bitter history of suffering inflicted upon working class areas of North Belfast by Loyalist death squads, the conscious decision by local criminals to invite a gun man with proven UDA links into the New Lodge area displays the clear contempt and hatred that these hoods have for their own neighbours.

Drug peddling thugs provided an armed Loyalist with the opportunity to shoot dead Catholic youths in the New Lodge, the following day they were joined by another of their number from Ardoyne who just hours earlier had taken to social media to threaten members of the Irish Republican Socialist Movement with murder.

The IRSP ask North Belfast Nationalists and Republicans to be alert, local criminals have thrown their doors open to hostile elements in an attempt to promote their drugs trade within working class districts, together we must all find a way to take community power back.