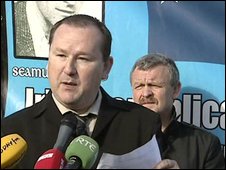 The INLA and IRSP were formed in 1974 in order to create a 32 County Socialist Republic. In those 35 years military volunteers and political activists have fought with courage and honour and have struck at the heart of the British military and political machine in Ireland and in Britain. The INLA is a key constituency within the Republican Socialist Movement (RSM). The INLA recognised that its struggle was based upon two distinct phases:

In 1994 the INLA put in place a no first strike policy and in 1998 called a complete cease-fire. Both of these decisions were based on its political analysis and monitoring of the changing military and political environment. The recent progress on loyalist decommissioning can be traced back to the INLA’s “no first strike policy” of 1994 and the INLA acknowledges this progressive step by loyalism.

The RSM has been informed by the INLA that following a process of serious debate, consultation and analysis, it has concluded that the armed struggle is over and the objective of a 32 County Socialist Republic will be best achieved through exclusively peaceful political struggle.

The RSM agree with this analysis and are fully supportive of the move to build a left wing party that has a clear objective of a 32 County Socialist Republic based on the principles of equality, justice, inclusion, human rights and dignity.

It is within the above objective that the RSM opposed the Good Friday Agreement and continues to do so. We as a movement believe that the Six County State is not a viable political entity, which cannot be reformed and fitted into a flawed two State solution.

The RSM has always aspired to the principle of the primacy of politics as espoused by Ta Power.

The future struggles are political. We urge all comrades, members, volunteers and supporters to join the political struggle ahead with the same vigour, commitment and courage that was evident in our armed struggle against the British State.

To para-phrase James Connolly ‘let us arise’, build a left political alternative in Ireland and support the struggle against global capitalism.

Ultimately our allegiance is to the working class, onwards to victory.

by IRSP Admin for Uncategorized
The following statement was released to the Sunday Tribune on Friday 6th March. An article…

by IRSP Admin for Uncategorized
Comrades, Supporters, Families and Friends, we the Republican Socialist POW’s here in Portlaoise Gaol send…

IRSP Step Up The Drop The Rents Campaign in Belfast

The IRSP in Limerick cast a critical and watchful eye on the emerging rabble of far-right conspirators in Ireland.